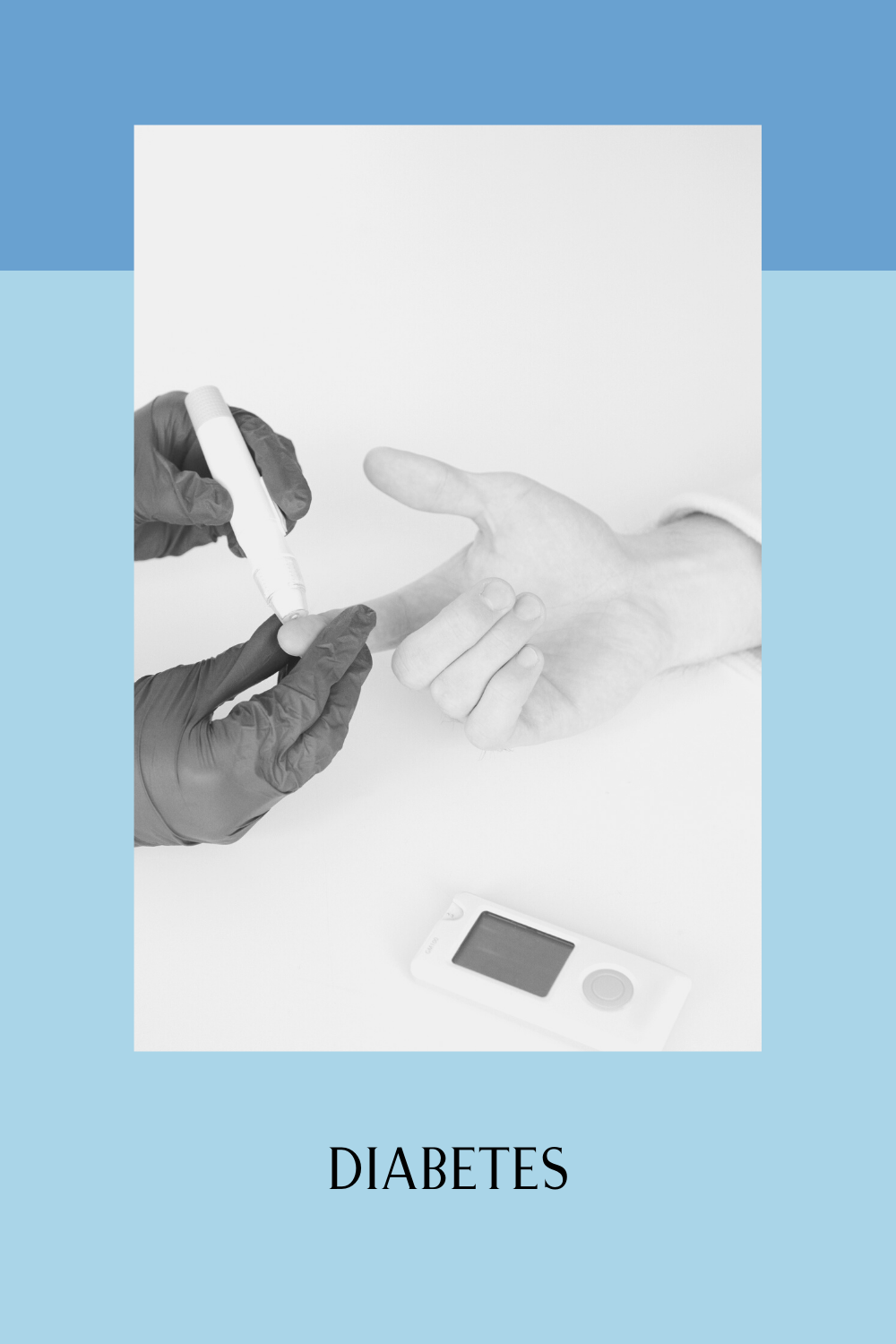 Diabetes is an important topic in nursing school, and a common diagnosis that you’ll help treat in your future patients.

In this podcast, I talk about the:
Differences between type 1 and type 2 diabetes.

Complications such as Neuropathy, Retinopathy, Peripheral Vascular Disease, and Nephropathy.

How it's diagnosed (Hgb A1C test)

Signs and Symptoms of hypoglycemia and hyperglycemia

Check out Picmonic for a great way to memorize the types of insulins.
https://www.picmonic.com/viphookup/nursingschoolweekbyweekLGH22

Hey everyone! Welcome to the Nursing School Week by Week podcast. I’m your host, Melanie. This podcast focuses on the goal of helping you do well in nursing school, and gives you tips on everything from acing your foundations class to getting your very first job as a nurse. Today we’re talking about Diabetes. This is a huge topic in nursing school, and a common diagnosis that you’ll see in so many of your future patients.

Now, I want you to picture this person: This is Diabetes Dave. A 50 year old man, who’s obese and weighs about 250 lbs is sitting in his recliner chair. He’s watching tv and eating chips. His main form of exercise is getting up to go to the bathroom because he has to pee a lot, or getting up to drink more water, because he’s so thirsty. And while he’s getting water, he thinks he should probably take the blood pressure medication his doctor prescribed to him. Oh, and the antibiotics, so the infection on his foot will finally heal. He’s already had to have one toe amputated and doesn’t want to lose another one. But which pill bottle is which? Oh, he needs his glasses. He’s as blind as a bat without them.

Alright y'all. That was Diabetes Dave, and I want you to picture him as we go through this episode. I’m mostly talking about type 2 diabetes, cause that makes up about 95% of the cases. Type 1 diabetes is less common, and is known as insulin-dependent diabetes, because these patients will require insulin injections for the rest of their lives. In type 1 diabetes, the body destroys its own beta cells in the pancreas, and since the beta cells are what make insulin, the body can’t make enough insulin to regulate glucose levels. Type 1 is the type of diabetes that's more likely to get DKA, or Diabetic Ketoacidosis because there’s little to no insulin, and the body starts burning fatty acids and produces ketones.

Type 2 is what most diabetics are. This is where the pancreas is still making insulin, but it’s either not enough, or it’s not being used well by the tissues. We call this “insulin resistance.” Risk factors for type 2 are: obesity, especially around the waist line, a sedentary lifestyle, and family history. So most of these risk factors, like diet and exercise, can be controlled by the patient. So remember, “in type 2, the problem is you.”

There are 4 main complications of diabetes: neuropathy, retinopathy, peripheral vascular disease, and nephropathy. Neuropathy is when too much sugar in the blood damages the walls of blood vessels and causes nerve damage. You’ve probably heard of diabetics having to have a toe or a whole foot amputated. This is because of neuropathy. They lost sensation in their foot, then got a cut or something on it and didn't even know. It got worse and worse, until they had to have it removed.

Retinopathy causes the most cases of blindness in an adult. High sugar levels in the blood, especially when combined with hypertension, causes damage to the blood vessels of the retina, in the back of the eye. This can eventually lead to blindness.

Peripheral vascular disease, or PVD is when fat builds up along the inside wall of the arteries and limits blood flow. This often goes hand in hand with high blood pressure.

And then we have nephropathy. This is what makes diabetics have to pee a lot and makes them so thirsty. In the word nephropathy, nephro means kidney and pathy means disease, so nephropathy is where the small blood vessels in the kidney are damaged.

If a doctor suspects diabetes, she will order a hemoglobin A1C test, which measures the average blood sugar levels over the past 3 months. A result of 6.5% or higher, means the patient has diabetes.

So, what do we do for a patient with diabetes? The treatment is not just medication, but must also include diet and exercise. The two main medications given for diabetes are insulin and oral hypoglycemics. What does insulin do? Picture insulin as a key. It opens up cells so that sugar can go into them and the cell can use the sugar for energy. Think: Insulin puts sugar Into the cells. Remember, patients with type 1 diabetes make little to no insulin, so they’re going to definitely need insulin shots to regulate their sugar levels. But patients with type 2, can often control their levels with just oral hypoglycemic pills, like Metformin. We wouldn’t give a type 1 diabetic an oral hypoglycemic because they work by helping the body respond better to insulin. But if your pancreas isn’t even making insulin, then it would be pointless.

As far as diet goes, the main things diabetic patients need to watch are carbohydrates and obvious desserts. Also, we don’t want them eating too much at once, because that can cause a spike in their blood sugar level. So we want small, frequent meals throughout the day. And exercise is great for everyone, but it’s especially beneficial for diabetics because exercise makes the body more sensitive to insulin. And this doesn’t have to be strenuous exercise. Even just 30 minutes a day of walking is beneficial.

If you’re working in the hospital and you have a diabetic patient, you or your nurse’s aide will most likely need to test their glucose level before every meal and at bedtime. We call this ACHS. This comes from the Latin AC, for “ante cibum” which means “before eating” and HS for “hora somni” which means at bedtime. So, you would prick the finger of the patient and test one drop of blood with the glucometer machine at around 8:00, 12, 5, and 10:00pm. A normal blood glucose level is between 70 and 120. In the hospital, if the result is between 70 and 150, you usually don’t need to do anything. But, if their sugar level is too low, or too high, you would follow the insulin protocol for your hospital. If it’s over 150, you’ll usually give a subq injection of insulin on a sliding scale, and the order for the patient will tell you how many units of insulin to give. If their glucose level was too low, under 70, then you would follow the protocol for hypoglycemia. Usually, you’d start by giving them some apple juice, and then rechecking their level in 15 minutes. If it’s still not going up, after 2 rounds of juice, you would usually give a concentrated dose of dextrose, which is sugar, into their IV.

What are the signs and symptoms of hypo or hyperglycemia? How will you recognize it? With hypoglycemia, the patient will be cold and clammy, or sweaty. Remember: cold and clammy, give ‘em candy. They can also become confused and drowsy.

Signs of hyperglycemia are the 3 P’s: Polyuria, or excessive urine, Polydipsia, excessive thirst, and polyphagia, which in this case, means excessive hunger.

Alright. Now I want to talk about 2 serious conditions that diabetics can get if their blood sugar level gets too high. You will definitely be tested on these, so here we go. Okay, the first one is DKA, or Diabetic KetoAcidosis. This is something that mainly type 1 diabetics get if their body starts burning fat because it doesn’t have enough insulin, and can’t get sugar into the cells. Because it’s burning fat, this causes ketones to build up in the body because ketones are a byproduct of burning fat for energy. This ketone buildup throws off the pH balance of the body, and leads to metabolic acidosis with a  pH of under 7.3. With DKA, we’ll see blood sugar levels from 250 into the 500s. The patient will also have a fruity smell to the breath, and kussmaul respirations, which are fast, deep breaths. I’ll talk about the treatment for DKA in just a minute, cause it’s the same as the second condition, which is HHNS. HHNS, or Hyperglycemic Hyperosmolar Non-ketotic Syndrome, is more common with type 2 diabetics and can result in a glucose level of over 600, which is just crazy. This is a medical emergency, and the mortality rate is very high. Up to 20% of patients who develop HHNS will die. These patients will present with confusion due to extreme dehydration, but no ketones. That’s why the N in HHNS stands for Non-ketotic. The main treatment for both DKA and HHNS is fluids, fluids, and more fluids through their IV, and insulin.

What education do we need to give diabetic patients? We need to teach them about Sick Day Care. Make sure they know to keep taking their insulin when they’re sick, or recovering from an injury. They need to check their blood glucose every 4 hours and they may need more insulin than they normally take while they’re sick. Many people lose their appetite when they’re sick and think because they’re not eating, they should skip their insulin. But this is not the case, since the body usually actually needs more insulin when it’s sick.

We also want to teach our patients to inspect their feet every day for cuts or redness, since diabetes causes neuropathy, or nerve damage and they might not feel the pain that would normally come with a cut on their foot. Remember Diabetes Dave? He had a missing toe because it had to be amputated. Diabetes is the most common cause of amputations.

And finally, we want to teach them how to give themselves insulin shots, if they need them. Insulin is given subcutaneously, at a 45-90 degree angle. In the abdomen, about 2 inches away from the belly button; The back of the upper arm, or the front of the thigh. And remind them to rotate sites, so they don’t build up scar tissue.

Alright, you guys, I hope you found this review of Diabetes helpful. If you’re looking for an easy way to remember the different types of insulin, I highly recommend Picmonic for that. They have a great cartoon picture and story to help you remember them, and I’ll put a link to it in the show notes. Alright, have a great day, and I’ll talk to you next time.

Email has been submitted.