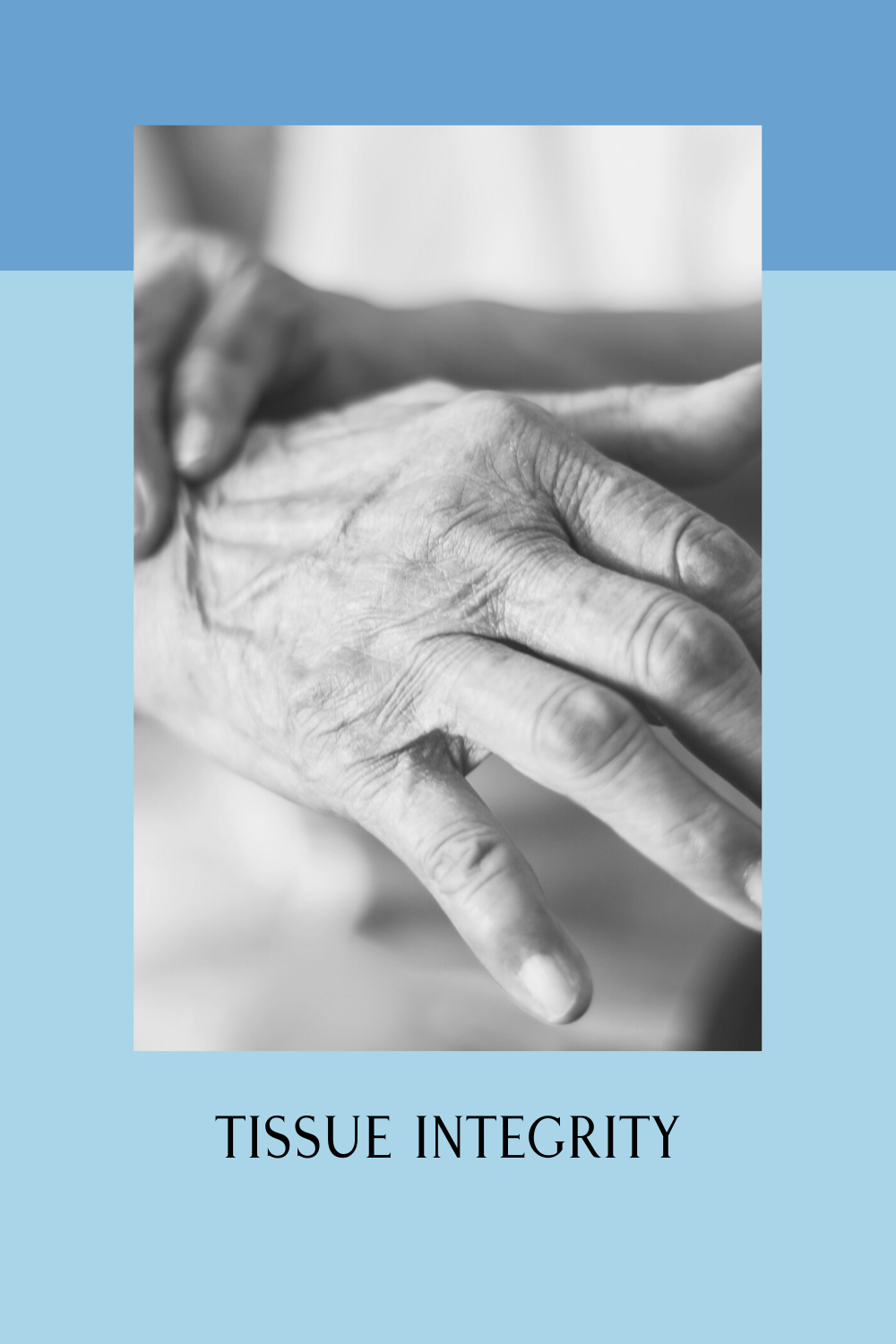 For the 1st week of nursing school, the most high-yield topic is tissue integrity.

Well, what is tissue integrity? It’s your skin’s ability to repair itself and stay healthy. Let's talk about it!

Hey there everyone! This is Melanie, and welcome back to Nursing School Week by Week.

Well. I just finished my 1st week of nursing school, and it was just. So. much.

I felt like I was already behind before school even started. I studied pretty much anytime I wasn’t in an actual zoom class, or in lab, or spending a small amount of time with my family. I keep thinking about a nursing tee shirt that I’ve seen and that I might have to get that says, “I can’t. I’m in nursing school.” That is just so true.

Alright. So, each week, I’m going to talk about the most high-yield topic for that week in nursing school. This is the topic that you’ll get the most questions from on your test. Now, of course, your school may be a little different or put a little more emphasis on something else, so just keep that in mind.

OK. So, for the 1st week of nursing school, the most high-yield topic is tissue integrity.

Well, what is tissue integrity? It’s your skin’s ability to repair itself and stay healthy. Now some skin has a harder time with this. If you’ve been around an elderly person lately, you may have noticed some bandaids on their arms or hands. That’s because as people get older, they don’t make as much collagen, which makes their skin thinner and less stretchy. A lot of things slow down as people get older, including their ability to heal. So an older person might take months to heal from a little scratch.

Another group of people who have thin skin are newborn babies. Until they’re about 2 years old, they’re skin is more similar to the delicate skin under an adult’s eyes! Also, the protective barrier function of skin isn’t developed yet in babies, so they absorb a lot more of any lotions or topical (cream) medications. Another difference in baby's skin is that they don’t shiver until they’re about 6 months old. As we know, one way our body warms up when we’re cold is by shivering. A baby has a special type of brown adipose fat that makes heat when they’re cold.

There are also some differences in dark skin compared to caucasian skin. When dark skin becomes irritated and then inflamed, it can have a harder time getting rid of that inflammation. We see the consequence of this in something called a Keloid. A keloid is a raised, ugly scar that shows up after an injury, like a surgical incision has healed, and is much more common in African Americans.

So how does a nurse know if someone has good, healthy skin, or if their tissue integrity is not so great?

Well, a nurse’s most important job is to assess. Assess assess assess. What does that mean? It means to look, and feel, and listen, and even smell. To assess a patient’s skin, you are going to look for any colors that don’t match the rest of their skin, look for cuts, or scars, etc. If they have any openings in their bodies, like catheters, tubes, or stomas, you will inspect those. If you notice any strange smells, you will investigate that. Then you’re going to use your hands to palpate, or touch, the patient to test for edema. Edema is swelling that’s caused by extra fluid that’s trapped in the body's tissues. To test for edema, you will press down on the top of the patient’s foot with your thumb. If the thumbprint goes away quickly, that’s good. That means they don’t have any or much of any swelling. But, if you lift your thumb away and you can still see a dent or pit where your thumb was, then they have swelling or are edematous. You would document their edema as being either 1+, 2+, 3+, or 4+ with 4+ being the most edematous.

Another test you would do is to see if the patient is dehydrated. This is a skin turgor test. You would pinch the skin over the back of their hand, on the abdomen, or if their elderly, under the collarbone. If they are dehydrated, it will take longer for the skin to bounce back from it’s pinched position.

Alright, so you’ve assessed the skin, but now you have to assess the hair and nails. You’re going to run your gloved hands through the hair, looking for things like: lice, or bald patches which could mean they have a fungal infection. And you can look for cradle cap, if it’s a baby or toddler. Cradle cap is very common, and can usually be cleared up by carefully combing out the dead skin off the scalp.

When you’re looking at the patient’s nails, you want to make sure the nail color is even. If they are yellow, or too thick, they could have a fungal infection or psoriasis. You many also see pigmented bands on the nails. This is a dark stripe that goes down the nail to the tip of the finger. This is caused by melanin being deposited into the growing nail, but it’s actually normal for African Americans to have.

You also want to look at the curvature of the nails. So, if you hold up your finger at eye level, so you’re looking at the side of your finger, the spot where your finger meets your nail should make a 160 degree angle, meaning there’s a little dip where your finger and your nail meet, and then your nail goes up a little bit and curves. But with something called nail clubbing, there would be no angle there; just a straight line where the finger and the nail meet. This is usually a sign of hypoxia, which means not enough oxygen is getting to the tissues.

Alright, so you’ve done your assessment. You’ve looked, felt, and smelled, and you have some suspicions that the tissue integrity is not so great. What are some specific tests that can be run to say, “yes. This person has this condition”?

If you’ve found a lesion, a tumor, or some kind of suspicious mass, then a biopsy could be done. This is taking a sample of tissue from that area and is usually done to look for cancer.

Another diagnostic test is a culture. This is when you would take a sample from an open or closed sore, nails, or hair, and culture it, much like you did back in your microbiology lab. This can tell you what type of bacteria or fungus you’re dealing with.

Another test is the Wood’s lamp test, or black light test. This shines a black light on the skin to detect tinea, which is a fungal infection. The area with the fungus will have an orange glow.

The last diagnostic test you need to know concerning the skin is the Patch or Scratch test. If you suspect someone might be allergic to something, these tests will tell you what they’re allergic to.

With the patch test, the patient will have 20 or more substances taped to the skin of their upper back or their arm for 48 hours. Then their skin will be examined for allergic reactions (redness, swelling).

The Scratch test is similar, but instead of taping the substances to the skin, the allergens are injected into the top layer of skin with tiny needles.

Alright, so let’s say someone does not have good tissue integrity. What are some problems that we might see with them?

First, we could see skin lesions. This just means part of the skin looks weird compared to the skin around it. There are 2 categories of skin lesions: Primary and Secondary. So, if you got an ant bite, you would get a bump, or pustule, and that would be the primary skin lesion. Now let’s say it’s super itchy and the more you itch the more you scratch, and you scratch this pustule so much, that you wind up with a scar. That scare would be the secondary lesion. Some of the main primary lesions are macules, which are flat spots like freckles, or measles; and papules, which feel like a solid mass, like a mole or a wart.

Secondary lesions are: fissures, this is like a crack in the skin of your heel; scars, or a keloid (that’s the big, ugly scar that some people get after an incision heals.)

Another problem that nurses see that definitely involves the skin is wounds. As nurses, you will need to know how to describe wounds so you can document them. Wounds are described as “intentional or unintentional.” Was it an incision from surgery? Then it was intentional. Was it a gunshot wound? Hopefully unintentional then.

Next, you’ll say if the wound is open or closed. An open wound would be anything that has broken skin, even a paper cut. Closed would be like a hematoma, a bruise.

Another skin related problem that you will hear soo much about is the pressure ulcer. This is when patients lay in bed in the same position for too long and get a bedsore. These develop over bony prominences, like heels, hips, the tailbone, or ankles. The pressure causes ischemia, which is a restriction of the blood supply to the tissues. This causes necrosis, which is the death of the tissue in that area, and that forms a pressure ulcer, also called a pressure injury.

This is why it’s so important that you turn the patient to a new position every 2 hours! And look over their skin once every shift for signs of redness. If you do find a red spot, press it with your finger. If it turns white, and then goes back to red, it’s not a pressure ulcer. But, if it is non-blanchable, meaning it doesn’t turn white at all, but just stays red, that is a stage 1 pressure ulcer. These things can get serious and nasty very quickly. A stage 4 pressure ulcer is where the skin is worn away, and there is exposed muscle and even bone.

Hospitals use a tool called the Braden scale to determine how “at risk” a patient is for pressure ulcers. The patient is graded on how good their nutrition is, how active and mobile they are, and how moist their skin is, since if they are urinating on themselves a lot, they will have a higher risk of skin breakdown because healthy skin is usually dry skin. On the Braden scale, a score of 12 or under is considered high to severe risk.

Some things that we as nurses can do to minimize this risk is to turn them every 2 hours, keep their skin clean and dry, keep the head of the bed at 30 degrees or less, this would be the semi-Fowler’s position, and also, we want to avoid shearing the skin, or creating any unnecessary friction on their skin.

Ok. That’s all I have for you on the topic of Tissue Integrity. I hope this was helpful to you. Thank you so much for joining me, and I will talk to you again next week. Have a great day!

Email has been submitted.